I know my last three posts have been a pasta dish, but I think you know me by now!  I've been searching the globe to find this recipe which is a copykat from the Cheesecake Factory version.  I've finally found someone who broke the code!  I order this whenever I go there.  Their shrimp are not curled up, but "stretched out".  I though the only way I could do this was to put toothpicks in them to prevent them from curling up.  This worked OK, but I had a hard time removing them, so I wouldn't recommend it. 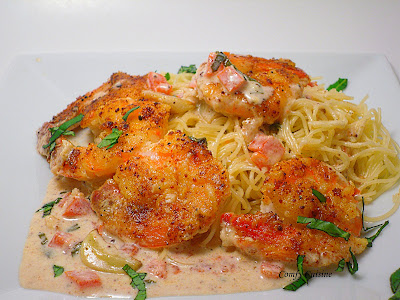 I threw my towel over my shoulder (a necessity) and decided to be a professional today and did my "mise en place". 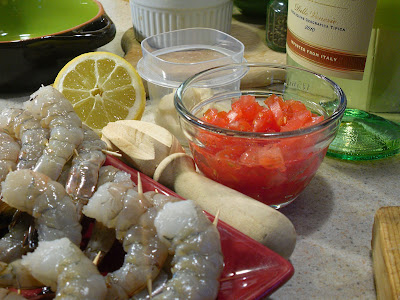 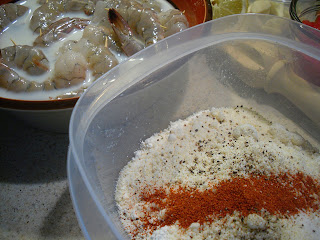 Dredge the shrimp until well coated.  Fry shrimp along with whole garlic in the oil until shrimp are golden brown, about 2 minutes per side.  Remove cooked shrimp and set aside.

Leave garlic in pan, stirring frequently to avoid burning.  Add wine and lemon juice to the garlic in the pan and bring to a boil.  Let wine reduce by half.  Add cream and bring back to a boil, lower heat and reduce by half again.  Add basil and tomatoes and cook for a few minutes to slightly soften tomatoes.  Add salt and pepper to taste.  Return shrimp to sauce, remove from heat and cover to keep warm.  Serve with angel hair pasta. 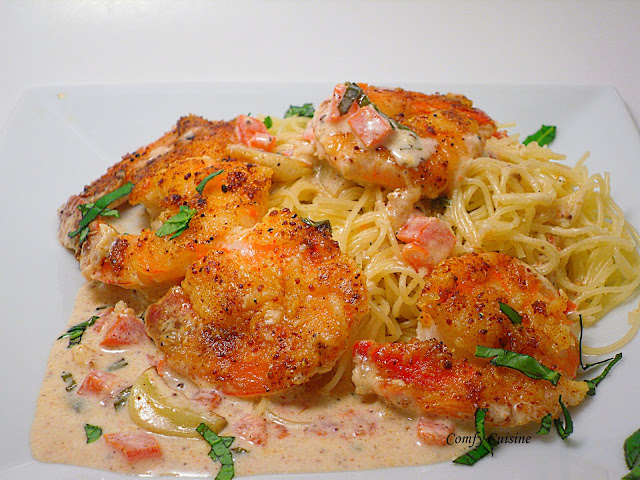 Make sure everyone gets one or two of the toasted garlic on their plate!﻿