I never had any luck with making a homemade cake from scratch.  So if I do make a cake, its usually from a boxed mix.  Nothing wrong with them, to me, it's still a homemade cake.  The Pistachio Pudding Cake is a throwback to the 70's when everyone was baking with some kind of jell-o or pudding.  I have memories of my mom putting lime jell-o into a drained can of sliced pineapple and having it plop out like jellied cranberry sauce!  Ahh, the good old days...........

The story of Jell-o and Gelatin.

Gelatin has been around for centuries, unlike Jell-o.  Jell-o is made from gelatin, which is made from animal collagen.  A hundred years ago gelatin was only used to preserve foods, by binding and sealing them inside a moist, sticky, and gelatinous layer.  Aspic-wrapped ham is one example of how gelatin can preserve meat.

Jello was invented in 1845!  The inventor sold the patent to someone else, who in turn sold it to someone else after being unable to sell the product.  Finally, salesmen were sent out to give out thousands of jell-o cookbooks and demonstrate the product, and jell-o finally made it's mark and started to become popular.

By 1930, congealed salads were in vogue and lime flavored jell-o was a popular ingredient in these aspic and salad recipes.  Savory jell-o flavors became available in the 1950's such as Italian, mixed vegetable, tomato and celery jell-o .  These savory flavors are now discontinued in the history of jell-o.

Chocolate jell-o was added to the history inventory in 1936 and was an instant pudding, which was made with milk.  The jell-o no-bake dessert line was launched in 1966, which allowed a cheesecake to be made in just 15 minutes.

The history of jell-o has had many false starts, and some flavors did not work out, but jell-o takes us back, and although it is not quite as popular today, we all have had jello at one time.

So for a throwback to the 70's, here's my Pistachio Pudding Cake - updated, of course.
Mix all ingredients at medium speed for 2 minutes.  Batter will get thick.  Grease and flour two 9-inch cake pans.  Distribute batter evenly among cake pans and bake 25-30 minutes, or until toothpick inserted in center comes out clean.  Let cool.  When cool slice cakes horizontally to form 4 layers.

Pistachio Cream Filling:
Prepare pudding mix using 3 cups of milk according the package directions.  Stir in pistachios and cream and refrigerate until ready to use. 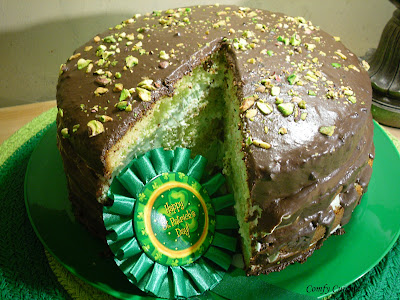 Chocolate Ganache:
Combine chocolate chips, heavy cream and butter and microwave at 70% power for one minute.  Stir.  Continue microwaving at 10-15 second intervals until smooth and all chocolate is melted. Set aside for 30 minutes.

Assembly your cake layers, filling with pistachio cream filling and leaving the top layer unfrosted.  Chill for 30 minutes while ganache is cooling. 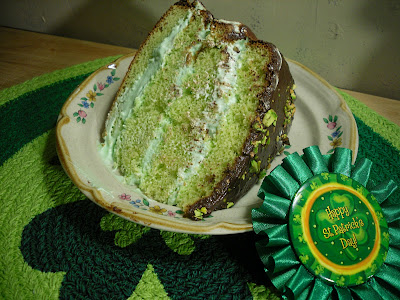