Buy some bones!  Roasting beef bones intensifies the flavor and deep brown color of beef broth.  The broth takes 3 to 4 hours to simmer, but the V-8 soup takes about 5 minutes to prepare!  I never was a big fan of cilantro and rosemary, but I have to admit that this made a really good broth!  Those two flavors cannot be detected, but gave it great flavor - don't leave it out! 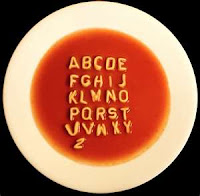 Preheat oven to 450 degrees F.
Place beef bones in a large roasting pan and drizzle lightly with olive oil.  Roast in the oven uncovered for 30 minutes, turning and basting several times.
Mix in the chopped onion, carrots, and celery and continue roasting for 20 minutes, basting occasionally to brown evenly.  Transfer the bones, meat and vegetables into a large stock pot.
Deglaze the pan by adding half cup water, and use a spoon or a spatula to scrape and dissolve the food particles in the pan.  Add the deglazing liquid to the stockpot along with enough water to completely cover the meat bones.

Cut the unpeeled onion in half and place cut side down in a 10-inch non-stick skillet.  Cook on high heat just until the bottom of the onion is almost black (this helps add additional color and flavor to the broth).  Add the onion into the stock pot with the other vegetables.

Bring the mixture to a boil, then reduce to a simmer, skimming any impurities from the surface of the broth.  Simmer for 3-l/2 to 4 hours.  Check seasonings and adjust.  Strain through a fine strainer to remove the bones and vegetables.  Allow broth to cool and refrigerate.  Once chilled, the excess fat will rise and harden on the surface and can be easily removed. 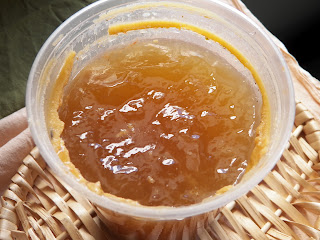 The broth gets very gelatinous from the bones.
Broth can be frozen or refrigerated.  Makes about 4 quarts of broth.

Put one quart of broth aside and let's make the soup!

The broth takes a while to cook, but once you have it, you can make this V-8 soup in about 5 minutes.  It so reminds me of Campbell's Vegetable Soup! - only better!

1 lb. ground sirloin
1 quart Savory Beef Broth
1 (46 oz. ) bottle V-8 juice (or use the spicy one if you want)
1 lb. frozen mixed vegetables
8 ounces uncooked small alphabet pasta or any small pasta (I looked all over for alphabet pasta)
6 cups water
Salt and pepper to taste. 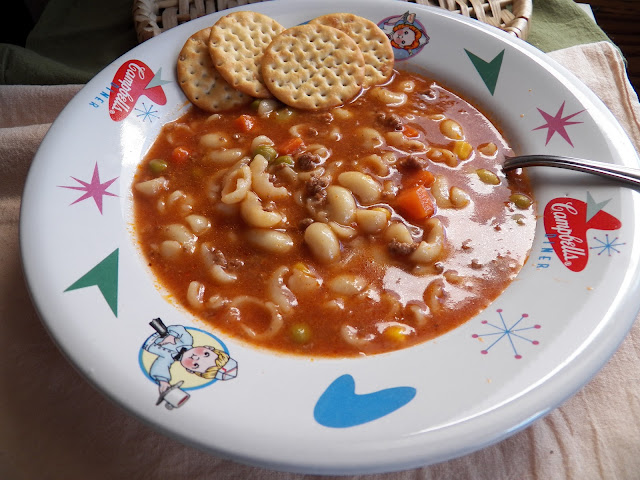 Place the meat in a large stock pot, and cook over medium high heat until evenly brown.  Drain the meat except for 2 Tbsp. of the juices.
Add beef broth, V-8, mixed vegetables, pasta and 6 cups of water.
Simmer 20 minutes or until pasta is tender.
Mmmmm Mmmmm Good! 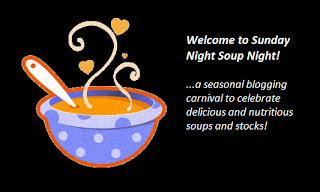 Sharing with Gooseberry Patch - Rounding Up Soups and Stews
at February 25, 2012