A few weeks ago, I decided that I wanted to go to Lidia's Restaurant in New York for my birthday.  New York City is only about a 25 minute train ride from here, and the train brings you right into Penn Station. 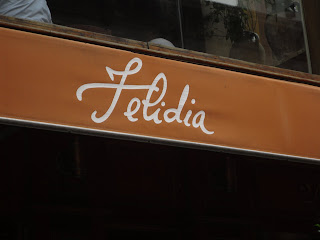 Felidia's is a renovated brownstone on E. 58th Street.  Warm and cozy, first class service and of course, amazing food!

I brought along my first cookbook of Lidia's with me JUST IN CASE she showed up and could sign it for me.  I was soo excited!  We ordered the Sunday Family Style Dinner which was really like a tasting menu, but it was plenty for all of us.  We started with a tray of fine proscuitto and salami, 4 small salads - baby beets with gorgonzola and camembert, octopus salad, shrimp salad and fingerling potatoes.  Onto the pasta course;
Three Fresh Ravioli stuffed with Pear and Pecorino Cheese - amazing! (I found the recipe and will be posting), and lasagna.  Meat course consisted of baby lamb chops, flat iron steak, roasted chicken and fresh sweet italian sausages.

The dishes were served family style and the bakeware was beautiful!  I just happened to find it on QVC. 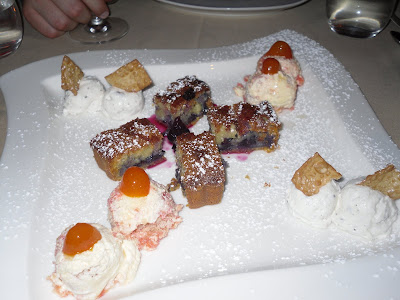 Did I tell you we ordered an $85 bottle of wine?
Hey - you only live once and it was my birthday :o) 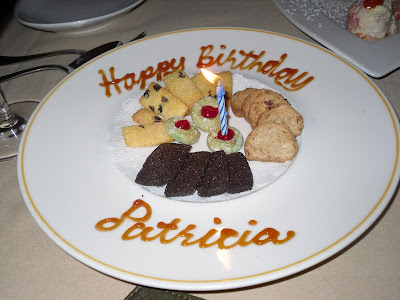 They brought this out for me!

I told the maitre`d that I was a big fan of Lidia's and asked if the chef could sign my book for me.  After a few minutes he came back to our table and told me that Lidia was in town and he would leave it on her desk for her to sign for me.  I'm still waiting for it!!!!  I know she's filming in New York so hopefully she will get to it soon. Update:  Just received my book today! 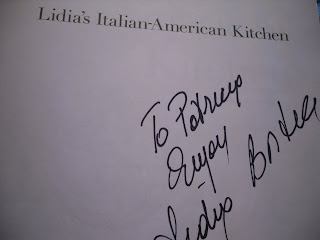 On to the recipe.  Her new cookbook features recipes from all the regions of Italy.  This next dish is from Lombardy.  It's a no-stir technique.  The name comes from Pitocchi (taken from the Greek word for "poor") where beggars roamed the lowlands during the seventeenth and eighteenth centuries seeking food; usually a plain rice dish is what they got.

Trim any excess far from the chicken thighs, and cut them into 1-inch chunks
Using a food processor, mince the onion, carrot, celery and garlic into a fine texture.  Pour the olive oil in the saucepan, and set over medium-high heat.  Stir in the vegetable mixture and season with salt.  Cook for about 5 minutes, stirring frequently, until the mixture has dried and begins to stick to the bottom of the pan.

Toss in the chicken, bay leaf and salt.  Stir the chicken in the pan until browned and caramelized, about 6 minutes.  Raise the heat, pour in the white wine and cook, stirring and scraping up the browned bits in the pan, until the wine has almost evaporated.

Pour in the stock, then add the rice. Stir well.  Bring to a boil, cover the pan and reduce to a gentle simmer.  Cook for about 14 minutes until both the rice and the chicken chunks are fully cooked and the consistency is creamy.

Turn off the heat, drop in the butter pieces, and stir until well incorporated.  Stir in the parsley and 1/2 cup grated cheese.  Spoon into warm pasta bowls and serve immediately.  Pass additional cheese at the table. 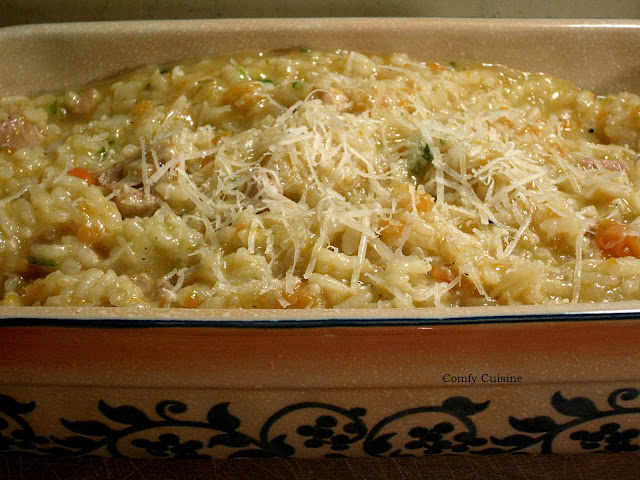 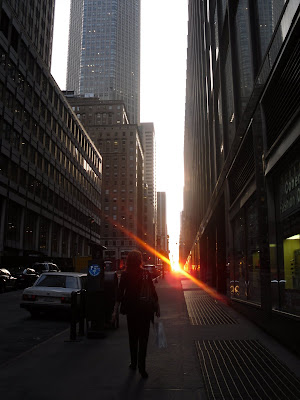 It was a great birthday!
~From Lidia Cooks from the Heart of Italy
~Menu Planning Monday