"Au poivre", or peppercorn coated, is a classic French preparation popular in the 1950's.  It's back now, and it's great on pork tenderloin.  Fruit always pairs well with pork, so I also included a recipe for Warm Apple Barley Salad. 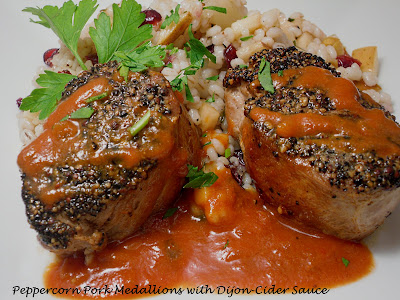 You will need:
Salt pork medallions on both sides.  Dredge one side of each medallion in peppercorns.  Heat 1 Tbsp. oil in a non-stick skillet over medium high heat.  Add medallions, pepper-side down, and saute until brown, about 3 minutes.  Turn medallions and continue cooking until pork reaches 145 degrees on meat thermometer, about 10-12 minutes more.  Transfer to a plate, tent with aluminum foil, and let rest.

Deglaze pan with wine and simmer until nearly evaporated.  Increase heat to high, add apple juice and vinegar, and simmer until reduced to 1/3 cup, 5-7 minutes.  Whisk in mustard and season with salt.
Serve pork with sauce and Warm Apple Barley Salad.