Everyone loves Chicken Parm!  This is a make-ahead recipe that is quick, easy and soooo good!

I have included a recipe for a quick marinara, but you can easily use a good store bought sauce.  I use Victoria Brand Marinara sauce.  It's one of the best sauces I have found on the market.  America's Test Kitchen rated it #1.  It is more expensive, but I stock up when it's on sale.

Cook the broth, garlic, tomatoes and basil in a skillet over medium-high heat, stirring occasionally, until slightly thickened, about 15 minutes.  Season with salt and pepper.  Set aside.

Season the chicken with salt and pepper.* Place chicken on work surface.  Sprinkle with the parsley and put one slice of mozzarella on each cutlet.  Starting at the short end, roll up to enclose the filling.  Secure with a toothpick.

Mix the parmesan and breadcrumbs in a shallow dish.  Put the egg in and another dish and beat until foamy.
Dip the chicken rolls in the egg, then coat with the breadcrumb mixture.  Refrigerate until ready to prepare.

In a cast iron skillet, melt butter and olive oil.  Fry chicken quickly to brown on all sides.  Remove to a plate.
Wipe out skillet and add sauce.  Bring to a simmer and return chicken back to the skillet.  Let simmer on low, covered,  until chicken is cooked through, about 20 minutes, depending on the size of the chicken cutlets. 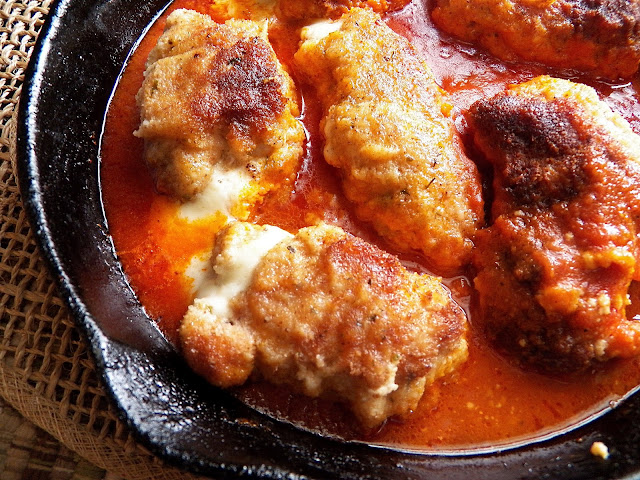 It's hard to keep that luscious cheese from melting out!
Serve with spaghetti or polenta.

I always like to serve Spaghetti with Oil and Garlic with this chicken. 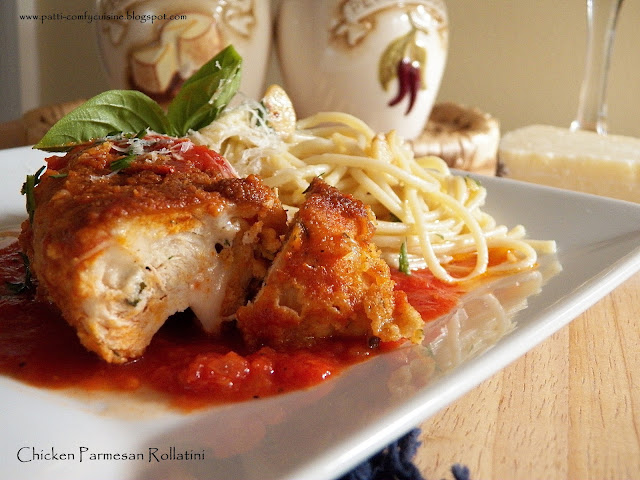 Cook spaghetti and directed until al dente (about 6 minutes).  Save the cooking water.
Heat 3 Tbsp. of olive oil in a large skillet over medium heat.
Add the garlic and stir until pale golden, about 2 minutes.
Remove from heat and add 1/2 tsp. crushed red pepper flakes.
Ladle about 1-1/2 cups of the pasta cooking water into the sauce.
Add the parsley, the remaining olive and salt to taste.
Fish the pasta out of the cooking water and drop it directly into the sauce in the skillet.
Bring the sauce and pasta to a simmer.  Cook until the pasta is done and coated with sauce, about 2 minutes.
Remove from heat and toss in the grated cheese.


This recipe came in 1st Place! 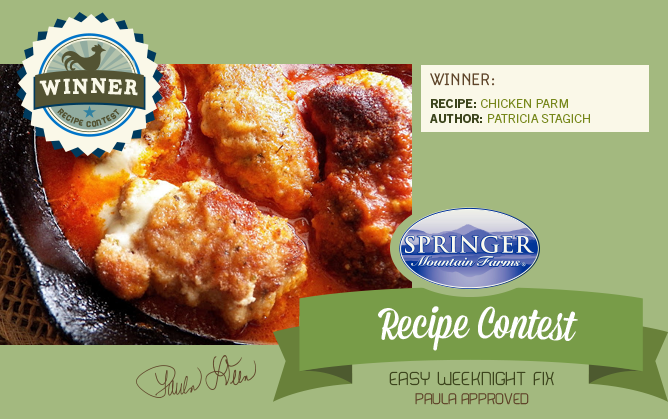