Corned Beef and Cabbage on St. Paddy's Day is really more American than an Irish Tradition.  Irish immigrants couldn't find a traditional Bacon Joint  and turned to their Jewish neighbors in New York City who were enjoying pickled beef brisket.

We rarely (if ever) make it ourselves, which is a shame, because it is so darn easy.

When you buy Corned Beef, usually the "good side" is visible through the package.  When you get it home and open it up, there is usually a thick layer of fat - which is part of what you pay for.  Not to mention that spooky slime that oozes out of the vacuum bag.....

Now - there are two issues we have to deal with;  what we use to cure the meat.

Salt Peter - Supposedly found in your local drugstore.  A major component of rocket fuel and gunpowder.  Can also be found in toothpaste and stump removers.

Pink Salt or Sodium Nitrate - This is actually a pigment fixer (gives us the rosy pink color of the meat) and a botulism blocker.  The recipe I used called for Morton's Tender Quick Curing Salt . This can be found in Wegman's Supermarkets, but I ordered it online.

You can "corn" beef without any of these additions, but it will take about 10 days.  Alton's Recipe for Corned Beef .

Doing a little planning, choosing your own piece of choice brisket, enjoy corned beef like never before. 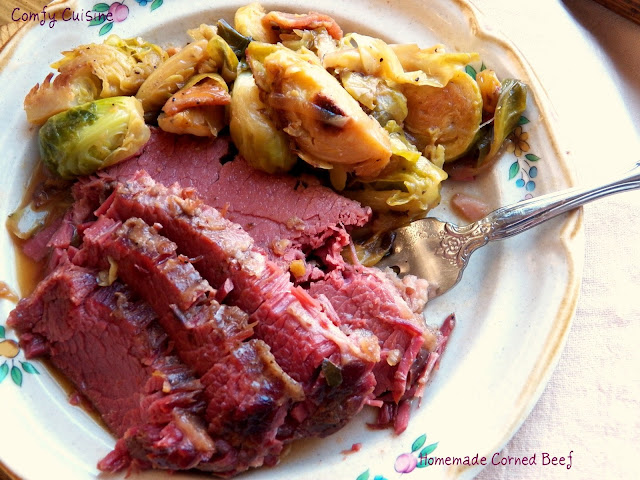 Grind 5 tsp. Pickling Spices into a fine powder.
(The original recipe called for measurements of individual mustard seeds, etc.  Since everything is in Pickling Spice, I just used this) 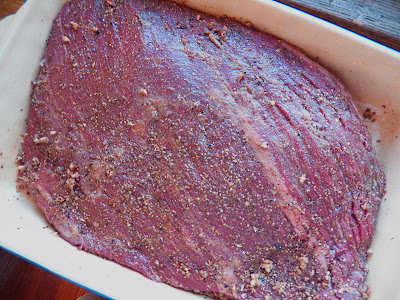 Cover dish with plastic wrap and weight meat with something heavy (like cans of tomatoes).  Cure brisket in the refrigerator 72 hours, flipping halfway through.

At this point, your job is done, until it's time for braising.

When ready to braise, rinse cure from the corned beef under cool running water.
Add beef broth, garlic and pickling spices in a large pot.  Add corned beef to braising liquid and bring to a boil over high heat.  Cover and transfer to a 300 degree F. oven.
Braise until fork-tender, turning halfway through, 3-1/2 to 4 hours depending on the size of the meat.
Once braised, let beef rest in the braising liquid partially covered about 1 hour.
Remove to a cutting board and thinly slice against the grain.
The braising liquid is almost like a gravy.  I strained it and used it to reheat the brisket. 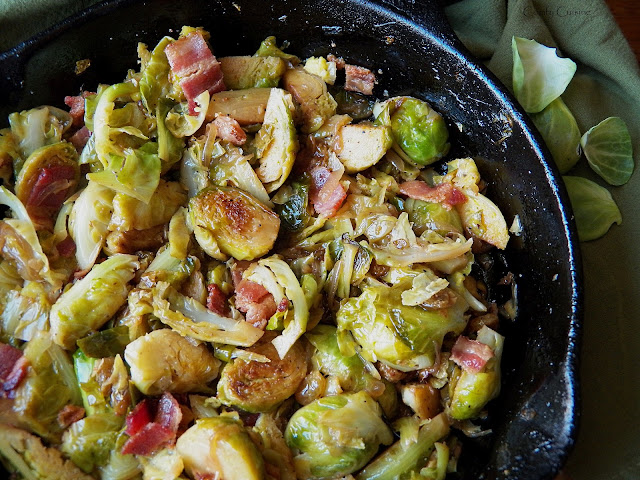 Heat a large heavy skillet over medium heat.  Add bacon and cook until crisp.  Transfer to paper towel to drain.
Add brussels sprouts to drippings in skillet, season with salt and pepper.  Cook, stirring often, until well browned in spots.  Reduce heat to low.  Add raisans, onion and butter; cook until onion is soft.  Add broth to skillet; increase heat and bring to a boil, scraping up browned bits from bottom of pan.  Reduce heat to medium low and simmer until broth has evaporated 1-2 minutes.  Stir in vinegar and crumbled bacon.  Season to taste with salt and pepper.

If you think you don't like Brussels Sprouts, I urge you to try this recipe.
Everyone will want seconds of these! 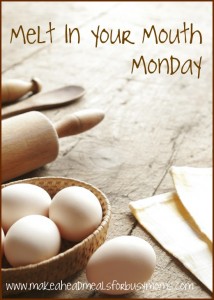 Make Ahead Meals for Busy Moms